SARS- CoV-2 (COVID-19) is an enveloped single stranded RNA virus of the family Coronaviridae, genus Betacoronaviruses. All coronaviruses share similarities in the organisation and expression of their genome and are usually of zoonotic origin. They cause disease with symptoms ranging from those of a mild common cold to more severe ones such as the Severe Acute Respiratory Syndrome (SARS)

SARS-CoV-2 is transmitted person to person primarily via respiratory droplets, but also indirect transmission through contaminated surfaces is possible. SARS-CoV-2 can be isolated from respiratory samples obtained via naso/oropharyngeal swabs. The virus accesses host cells via angiotensin-converting enzyme 2 (ACE2), which is most abundant in the lungs.

The incubation period for SARS-CoV-2 is thought to range from 2-14 days following exposure with most cases showing symptoms around 4 to 5 days post exposure.

Symptoms include fever, cough, fatigue, sputum production, loss of taste, smell and shortness of breath. Some or all may be displayed. Severe illness is characterised by dyspnea, hypoxia and patients can require ventilators to keep them oxygenated.

Currently there are 2 types of test available for COVID 19.

IF you have the symptoms and are ill with what appears to be COVID 19 then you will require the Antigen PCR test which is collected by swabbing the patient’s throat and nasal passages. Usually the swab is first taken from the back of the throat and then the same swab is place far up the nostril as possible to maximise the viral collection. This is then sent to the laboratory for analysis which is by way of extracting the RNA and then enhancing it by Polymerase Chain Reaction (PCR) and measuring for its presence. The test is dependent on the viral load collected and can be influenced by the swabbing technique. The results are usually available within 24 hours of receipt in the laboratory. There are currently several manufacturers of these antigen tests but all work in pretty much the same way.

If you have already had COVID 19 or feel that you have, then the antibody test will tell you whether that is the case. When you get any bacterial or viral illness the body tries to fight it off by producing antibodies to combat the virus. Seroconversion has been observed as early as 5 days after symptom outset for IgM and within 5 to 7 days for IgG but it is best to wait for at least two to three weeks after symptoms or exposure for maximum seroconversion to occur before being tested.

Currently there are several antibody tests available on the market some of which are home testing kits. The specificity and accuracy of these are still up for debate. Major manufacturers, like Roche and Abbot have managed to get their tests out onto the market (and others like Siemens and Beckman are in trials). These are serum based antibody tests which are more specific and sensitive. We at Preston have the Roche Elecsys Anti-SARS-CoV-2 immunoassay antibody test which has been approved for use by Public Health England due to its high sensitivity and specificity.

This involves a venous blood sample being taken of a patient who has had the illness ensuring it is taken at least 3 weeks post symptoms for results to be valid. The sample is sent to the laboratory where it is booked onto the laboratory computer system, centrifuged to remove the serum which is then analysed on the Roche e801 analysers. The results are usually available within 24 hours.

The Laboratory at Royal Preston has been at the forefront for the COVID-19 testing for both the antigen and the antibody. When the PCR testing went live Preston was analysing tests for Lancaster, Blackpool, Blackburn and Preston doing anything between 400 to 600 tests every 24 hours.

Again when the antibody testing was approved Preston was running analysing samples for Lancaster, Blackburn and Preston achieving a turnaround of 2000 tests per 24 hours. 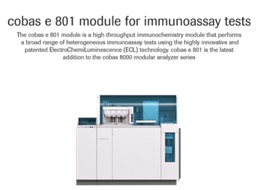