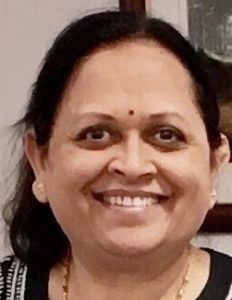 Born in Nakuru East Africa and then later moved to India with her family in 1964. After completing a high school education in India, she came to United Kingdom in 1977 because of her marriage to Babubhai Nayee.  Whilst taking on the responsibility for a family owned business in Preston, Manjuben also attended several short courses around personal development at the Gujarat Hindu Society in Preston. During her spare time, she volunteered as a newspaper/book reader for Galloways Society of the Blind.

Manjuben embarked on the holistic living courses in 2003, although English was her second language, she forged ahead to successfully achieving the level of Reiki Master 3A (Attuner) in 2012. Her family have been her strength and backbone to her achievements.

Being a Master Attuner she also leads a team of Reiki attuners and has 15 years of practical experience ‘under her belt’ of assisting with Grandmaster holistic therapies. Spearheading the reiki tasters’ sessions at Health Mela organised by National Forum of Health and Wellbeing.

Manjuben was presented with the volunteers award at Women’s Conference held at the Gujarat Hindu Society Preston in 2010 and for the citation 2017 for the Grand master designate by the Holistic Living Group Preston.

After attaining a BSC Honors in Biomedical Sciences, went on to pursue a career as a Systems Analyst in Pharmacy IT and then moved on to Hospitality industry.

Worked at Chemtec systems and McLernon computers (Lancashire)  assisting with technical support on Patient Medication Systems and also attended pharmacy workshops all over the UK and Republic of Ireland.  Worked with the PPA in Republic of Ireland to release an endorsing module for prescriptions.  Also helped with installation and training of pharmacy systems.

Reiki Master A & B, teach and conduct practical sessions for 2nd level advance holistic course and deliver lectures on different modules for HLC3 Master Level course. Also is a 1stand 2nd level Reiki Attuner and a Homeopath.  Delivered a lecture on Holistic subject at Bolton University.

Migrated to the UK in 1979 after getting married, whilst raising a young family volunteered in the community supporting people with their development. This led to a sparked interest in obtaining a qualification in childcare. Has also undertaken numerous training course each year to maintain skills up to date.

Has more than 25 years’ experience of working in Early Years especially with the age group of 3-5-year olds. Also taught the Gujarati language to young students, from reception to GSCE level for Preston College and the Gujarat Hindu Society.

Completed the HLC3 (Master Level) in 2011 and is a teacher for the Holistic Living Group Preston (established in 2012), delivers various modules of the Holistic Living Course (levels 1 to 3). Also, an Attuner for reiki courses level 1 & 2. Associates with holistic practice with Manjulaben Nayee Grand Master Designate.

Graduated in Software Engineering, with a Master’s in Human Resource Management

Completed the HLC3 (Master Level) in 2016 and is a teacher for the Holistic Living Group Preston (established in 2012), delivered various modules of the Holistic Living Course (levels 1 to 3). Was a member of the team responsible for writing the HLG Constitution.

Speaker on Holistic Living at Bolton University and produced videos on Pranayama & Reiki for National Health & Well Being Forum website.

About the Author: Abhay Vaidya